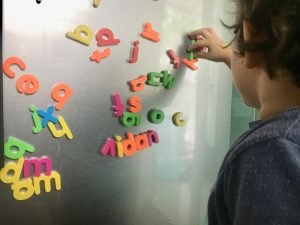 As you read about how children expand their spelling skills, you’ll learn about:

Some children in Crystal, Minnesota, begin developing skills by the time they are five years old, while others may not be ready to read until a few years later. Understanding the stages of spelling development can help you determine where your child’s skill lay and what type of spelling lessons they are ready to tackle.

Most children learn their ABCs between three and five years of age but may not understand that letters stand for specific sounds. As spellers progress, they learn about the sounds and begin writing their letters left to right.

Children begin matching written letters to letter sounds consistently between ages five and nine years old. As they advance, they use vowels in the middle of words and vowel patterns correctly. Learners start recognizing word families and using consonants at the beginning and end of words.

Children between six and 12 years old typically become comfortable spelling short words and begin recognizing words with an uncommon spelling pattern, such as “wait” instead of “wate.” Spellers also understand “oi” and “ou” vowel patterns in most one-syllable words, such as soil and found.

Spellers eight to 12 years old apply short-vowel patterns and letter sounds to multi-syllable words. They learn the rules about doubling consonants, changing the “y” to “i,” adding suffixes, homophones, and compound words.

Learners age 10 and older learn the Greek and Latin roots of words and the importance of patterns and sounds. They explore the relationship between meaning and spelling. This is the final stage of spelling development in Crystal, Minnesota, and it continues through adulthood.

How to Teach Spelling to Your Child

Whether your child is struggling or you want to help them move through the learning stages confidently, you can use the following ways to teach spelling:

Spelling word origami, word catchers, and personalized crossword puzzles can be fun ways to help your child learn spelling words. Contact us to learn more about the differentiated instruction and academic support we offer students at Beacon Academy in Crystal, Minnesota.